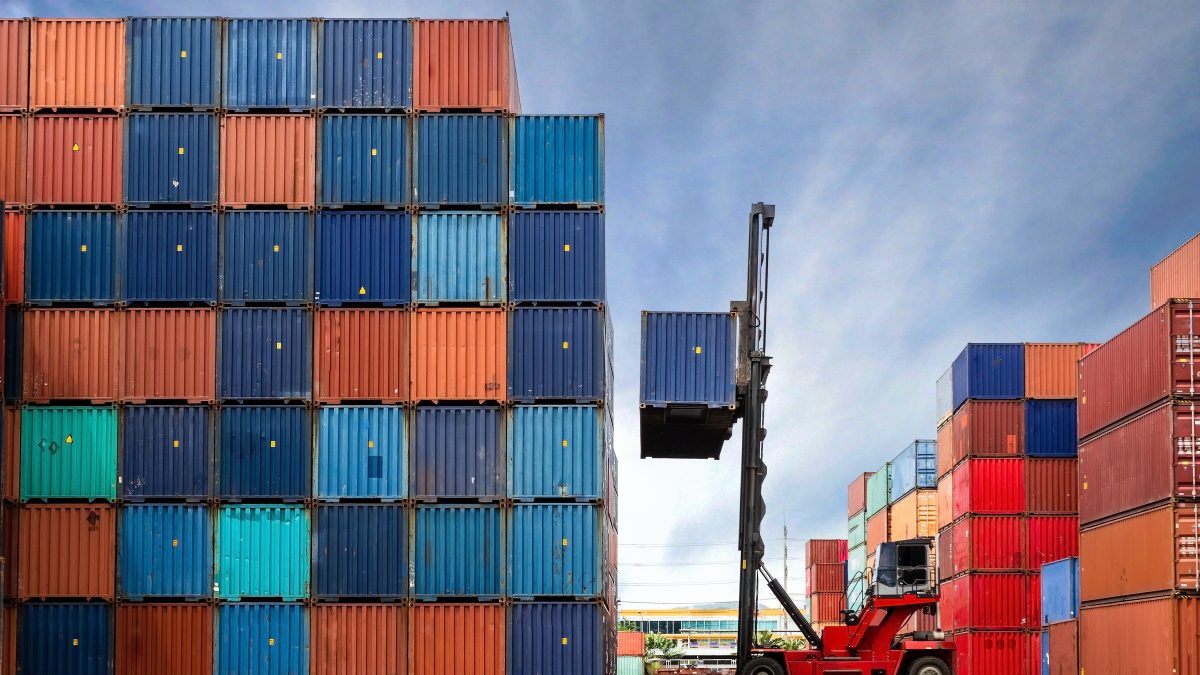 After following along with the demos in this three-part blog you will be able to:

1. Using MLflow with a Docker Environment

In this section we cover how to use the various features of MLflow with a Docker environment.

In Part 1 (Noodle | Medium) of this three part blog we covered using MLflow with an Anaconda environment. Docker has some advantages in terms of scalability compared to Anaconda. If you develop a pipeline in a container afterwards, with minor modifications to your Dockerfile, your pipeline is ready for production. For example, you may need to delete aspects of the Dockerfile used for development (Jupyter library, SSH configuration), include your pipeline script as a command, and add a way to output objects of interest (write to database, serve over REST). You can then orchestrate containers, running your pipeline with tools like Kubernetes on a cluster that scales with traffic. Alternatively, if you are training in a container (as we do below) you can run containers in parallel on a cluster to do hyperparameter tuning.

Setting up for the Tutorial

Note: The name of your image (“mlflow_image” in this case) must match the name in your MLproject file.

The Dockerfile below is used to build an image which creates a conda environment, then sets up SSH with user “dockeruser” and password “123”. 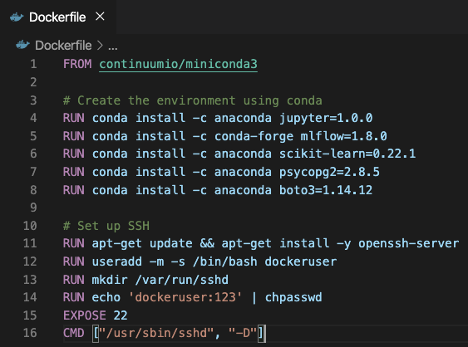 8. Build a Container from the Image

This command will return a lot of information about your container. The IP address should be under “NetworkSettings”.

If the container is not running locally (for example running in a VM) you can port forward a local port to be connected to the container port in your VM. After you connect your local port to your container you can SSH as if your container was running locally. Choose a <local_port> you would like to use, use the <container_ip_address> that you got in the setup instructions, and lastly use the <vm_ip_address>. After port forwarding you can SSH to <local_port> in order to develop in your container. It is possible you may encounter a permissions issue if you are attempting to connect using a tool like VSCode SSH extension. This extension creates a .vscode-server folder inside of the destination folder mounted in the container and dockeruser may not have the permission to do this depending on the default permissions settings in your VM. If this is the case be sure to change the permissions of the mlflow_part2_dockerEnv directory you are mounting (chmod 777 mlflow_part2_dockerEnv). The command to port forward is below.

After SSH-ing into the container if using VSCode you may need to install any extensions you need in the container, select a Python interpreter, and then spawn a new terminal. Open experiment.ipynb and follow along. The notebook contains examples demonstrating how to use MLflow Tracking and MLflow Models. It also contains descriptions of how to use MLflow Projects.

Note: If you encounter the warning Warning: Remote Host Identification Has Changed! this could be due to a new container being on a port that previously hosted a different container. Delete the entry from ~/.ssh/known_hosts to resolve the issue.

The MLflow tracking API lets you log metrics and artifacts (files from your data science code) in order to track a history of your runs.

Note: The default behavior of MLflow Tracking creates an mlruns folder. Within this mlruns folder absolute paths are used by MLflow. This creates a conflict when tracking experiments created locally and within a container together. In this section to get around the issue I create a different experiment for runs created within the container and runs created from outside the container (named “notebook” and “script” respectively). From the notebook the experiment can be set using mlflow.set_experiment(‘notebook’). But it is worth keeping in mind that the proper way to resolve this issue is to use a database tracking URI (covered in part 3).

The code below logs a run with one parameter (param1), one metric (foo) with three values (1,2,3), and an artifact (a text file containing “Hello world!”).

By default, wherever you run your program, the tracking API writes data into a local ./mlruns directory. You can then run MLflow’s Tracking UI.

Activate the MLflow Tracking UI by typing the following into the terminal. You must be in the same folder as mlruns.

View the tracking UI by visiting the URL returned by the previous command. Then click on “notebook” under the Experiments tab.

This tutorial uses a dataset to predict the quality of wine based on quantitative features like the wine’s “fixed acidity”, “pH”, “residual sugar”, and so on. The dataset is from UCI’s machine learning repository.

This example uses the familiar pandas, numpy, and sklearn APIs to create a simple machine learning model. The MLflow tracking APIs log information about each training run like hyperparameters (alpha and l1_ratio) used to train the model, and metrics (root mean square error, mean absolute error, and r2) used to evaluate the model. The example also serializes the model in a format that MLflow knows how to deploy.

Each time you run the example MLflow logs information about your experiment runs in the directory mlruns.

There is a script containing the training code called train.py. You can run the example through the .py script using the following command.

Use the MLflow UI (as described above) to compare the models that you have produced.

You can use the search feature to quickly filter out many models. For example, the query (metrics.rmse < 0.8) returns all the models with root mean square error less than 0.8. For more complex manipulations, you can download this table as a CSV and use your favorite data munging software to analyze it.

After a model has been saved using MLflow Models within MLflow Tracking you can easily load the model in a variety of flavors (python_function, sklearn, etc.). We need to choose a model from the mlruns folder for the model_path.

Packaging the Training Code in a Docker Container with MLflow Projects

Now that you have your training code, you can package it so that other data scientists can easily reuse the training script, or so that you can run the training remotely.

You do this by using MLflow Projects to specify the dependencies and entry points to your code. The MLproject file specifies that the project has the dependencies located in a Docker image named mlflow_image (created from Dockerfile) and has one entry point (train.py) that takes two parameters: alpha and l1_ratio. 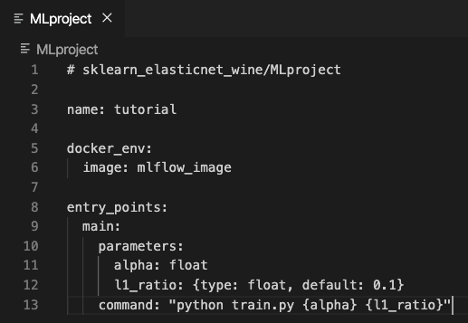 To run this project use mlflow run on the folder containing the MLproject file.

This builds a new Docker image based on “mlflow_image” that also contains our project code. This resulting image is tagged as “mlflow_image-<git-version> where <git-version> is the git commit ID. After the image is built, MLflow executes the default (main) project entry point within the container using “docker run”.

If a repository has an MLproject file you can also run a project directly from GitHub. This tutorial lives in the https://github.com/Noodle-ai/mlflow_part2_dockerEnv repository which you can run with the following command. The symbol “#” can be used to move into a subdirectory of the repo. The “— version” argument can be used to run code from a different branch. The “ — experiment-name” argument can be used to choose an experiment name in mlruns. We must set experiment in this case to be different than the experiment ran in the container because absolute paths in MLflow Tracking will lead to an error. The image must be built locally for this to work.

Now that you have packaged your model using the MLproject convention and have identified the best model, it’s time to deploy the model using MLflow Models. A MLflow Model is a standard format for packaging machine learning models that can be used in a variety of downstream tools — for example, real-time serving through a REST API or batch inference on Apache Spark.

In the example training code above, after training the linear regression model, a function in MLflow saved the model as an artifact within the run.

To view this artifact, you can use the UI again. When you click a date in the list of experiment runs you’ll see this page.

At the bottom, you can see that the call to mlflow.sklearn.log_model produced three files in ./mlruns/1/<run_id>/artifacts/model. The first file, MLmodel, is a metadata file that tells MLflow how to load the model. The second file is a conda.yaml that contains the model dependencies from the Conda environment. The third file, model.pkl, is a serialized version of the linear regression model that you trained.

In this example, you can use this MLmodel format with MLflow to deploy a local REST server that can serve predictions.

To deploy the server, run the following command:

Note: The version of Python used to create the model must be the same as the one running mlflow models serve. If this is not the case, you may see the error:

Once you have deployed the server, you can pass it some sample data and see the predictions. The following example uses curl to send a JSON-serialized pandas DataFrame with the split orientation to the model server. For more information about the input data formats accepted by the model server, see the MLflow deployment tools documentation.

The server should respond with output similar to:

Note: This command is experimental (may be changed or removed in a future release without warning) and does not guarantee that the arguments nor format of the Docker container will remain the same.

Here we build a Docker image whose default entry point serves the specified MLflow model at port 8080 within the container.

We can then serve the model, exposing it at port 5001 on the host with the following command:

Once you have created a container that serves the model with the above command, you can pass it some sample data and see the predictions. Similar to above, the following example uses curl to send a JSON-serialized pandas DataFrame with the split orientation to the model server.

Again, the server should respond with an output similar to:

The following resources contain all of the information and software used to create this repository. 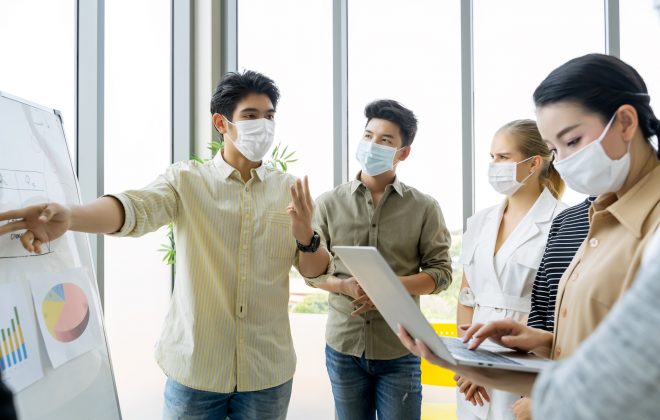 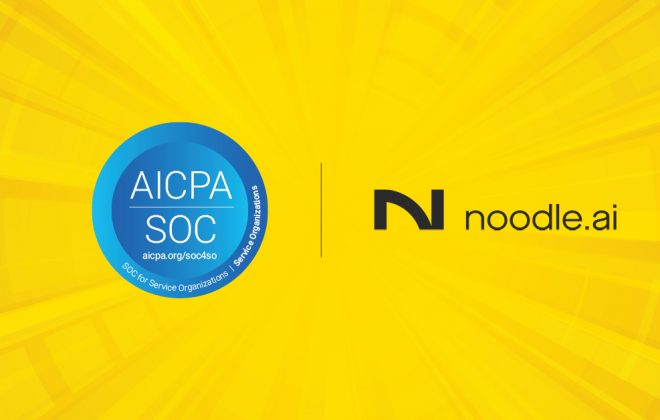 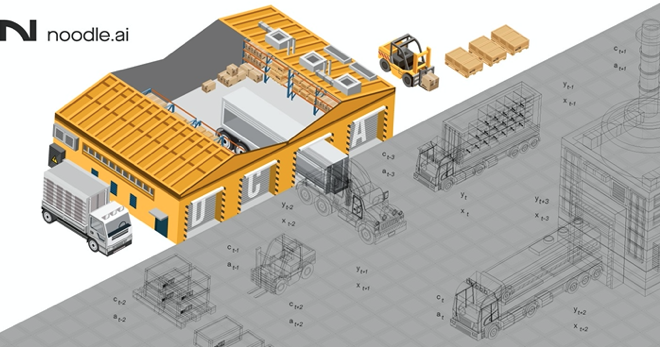